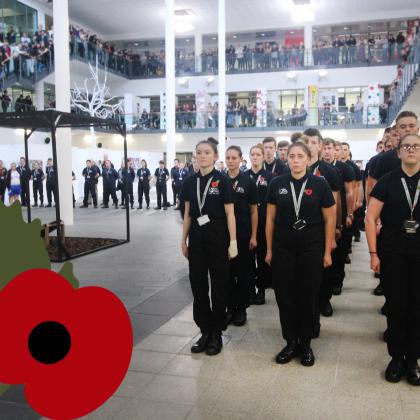 Marking 100 years since the end of WW1, students and staff came together to lay wreaths in a moving ceremony centred around the Southern Provincial Police Orphanage memorial plaque, commemorating those who died in the war.

The event, which took place on 9 November, started with a parade by the Public Services students led by Ryan Jolly, followed by a 2-minute silence. The ceremony drew to a close with the laying of poppy wreaths by representatives from across the College.

Students and staff from various curriculum areas had worked together to create unique poppy wreaths, representing the wealth of skills and creativity across the College. Students in the Engineering department welded poppies out of copper, whilst the art students used fabric and film strips to create their commemorative wreath. Supported Learning students also cut out paper poppies that were scattered from the balcony during the event.

In November 2013, a news article was published, searching for the home of a large bronze plaque that had mysteriously appeared in the basement of the Belmont Conservative Club.

The plaque was part of a memorial, originally erected in the Southern Provincial Police Orphanage after the war, to commemorate the former residents who lost their lives. This orphanage was situated on the East Surrey College site in Redhill. The College was contacted last year by Jeff Arnold-Smith, a descendent of one of those killed, as he had recognised his Great Uncle’s name on the plaque whilst researching his family history. Mr Arnold-Smith then requested that the plaque be returned to the College, its original home. The plaque now has a permanent home on the College roof terrace, in memory of Mr Arnold-Smith’s Great Uncle and those who lost their lives in the war.

The plaque was the centrepiece for the College’s Armistice Day event, with Mr Arnold-Smith joining the staff and students on the day.

“This morning’s Remembrance/Armistice Day event was an opportunity for students and staff to come together to remember and show their respect for those who served.

It was exceptionally moving to watch the Public Services students parade in to the central Winter Garden, and for a student representative from each department to step forward to lay a wreath of remembrance.

It was an excellent event that will last in the memories of all who were present”.

Not in Education or Training?

A Visit to Camomile Courtyard

Behind the Scenes at Hilton Hotel!

See your Aviation career take off!

College Closure over the Festive Period