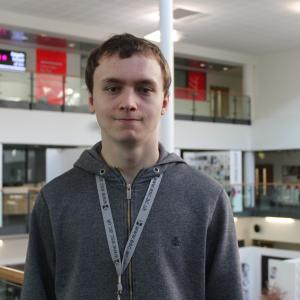 Michael joined ESC straight after GCSEs, and after enjoying Computer Science GCSE he knew he wanted to study IT.

"I've been interested in IT since I was young, and the course is a good step to help pursue a career."

He was grateful for the opportunity to retake his English GCSE alongside his main course, in order to get his grade up to boost employability. Whilst on the course, Michael took part in a Cyber Crime competition, set by the Government online. He managed to reach the third stage and was treated to a free Cyber Crime course to study in his spare time.

In order to gain more experience in IT,  Michael decided to interview for an IT Apprenticeship at the College, and was successful, joining the team as their new Apprentice!

Whilst supporting staff and students around the College, particularly with the transition to remote learning. He's found that the projects he is learning in class help with his Apprenticeship duties, for example, he's been writing computer scripts in class and has used these skills to write one for the workplace. Michael has also kept up his interests at home, using his Apprenticeship knowledge to set up new technology for himself.

In recognition of Michael's contribution, he won 'Best Apprentice Newcomer' at the December 2020 Staff Awards! He's hoping to complete his Apprenticeship in condensed time, stay on working and then further his studies with a Computer Science degree.

Passionate about IT? Explore our courses here.