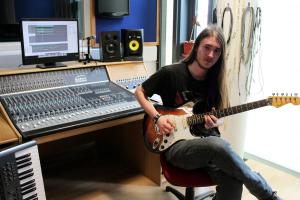 Sound & Music Production student Jack Cape has been commissioned by publishers Curious Fox to produce a piece of music inspired by a new novel; Half my Facebook Friends are Ferrets by local author Jackie Buckle from Reigate. The book is about a fifteen-year-old boy who fantasises about becoming a death metal guitarist and is full of humour, technology, music, friendship and a ferret called Ozzy.

Jack penned a heavy-metal-style track called Like a Mockingbird, taking its lyrics from the book. The promotional song will be used as part of the national marketing campaign for the book.

Jack studied Level 2 Creative Media at East Surrey College, Redhill before progressing on to the Extended Diploma in Music Technology which he is currently studying. He said:

“I was approached by the publishers to produce a track to accompany the book. It was a great opportunity to add to my CV and be a part of this project. I sat down with my guitar and came up with song ideas; lessons at College really helped with my music production skills and I came up with a demo. I sent the track to the publishers and they thought it was great and are now using it to help promote the book. I hope to continue my studies at East Surrey College next year on a HND Music Production course and then gain employment in the industry.”