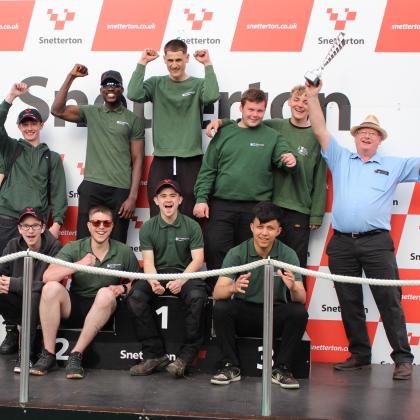 We had another successful win for the East Surrey College Motorsport Team in the Nankang City Car Cup and Student Motorsport Challenge, bringing home two more first-place trophies. Both races were held at the Snetterton race circuit on Sunday 22 May with our professional driver Andy Burgess behind the wheel of the number 57 car.

The second race was just as exciting with Andy battling to maintain a fifth-place position. After a tangle with another car and Andy receiving some damage to the rear bumper, he managed to hold on to the end of the race, gaining his second podium of the day.

Motorsports tutor George Keith commented: “Once again I must thank Andy Burgess for his fantastic driving throughout the day bringing home two more wins for the College team. The staff and students worked extremely hard to prepare the car for the track and it is a testament to their skill and dedication that these events can take place. I would also like to thank Boss Dog Graphics for their support in providing the graphics for the car. As you can see, the car looks brilliant on and off the track.”

Motorsport tutor Carl Bundy added: “It was a good day for the students to use the skills they’ve learned throughout the year in a realistic working environment. A big thank you to all staff and students that made this event possible.”

Once again, a huge congratulations to TEAM ESC and we’re so excited to watch you in the next event back at Snetterton on 23 July.

Welcome Back to College

Update for Parents and Students on Strep A and Scarlet Fever