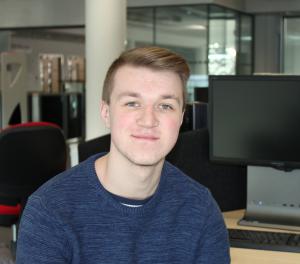 William chose ESC as it allowed him to join even though he left school with few qualifications. He has now gained Maths and English GCSEs, which he is very grateful to have achieved through College.

Will initially joined Business Level 1, before moving to IT Level 2.  He then progressed to the Level 3 course, which he enjoyed as he was able to gain his qualification through coursework. He said:

“Tutors have been a huge, positive influence on me. The course is challenging enough to push you to the level that you need to be at.”

William undertook a week's work experience at Canon UK in 2016, and was the overall winner of the programme, which involved students from other colleges and sixth forms. A member of staff at Canon commented:

“From day one, Will stood out. I believe he will have great success in the future... an absolute credit to the College.”

Following this success, he was offered an extended work placement with Canon and asked to consider their Apprenticeship Scheme following completion of his course.