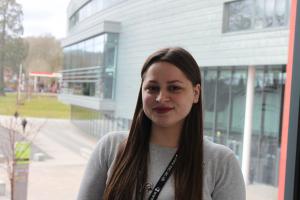 Veronica first came to ESC to study ESOL in 2014, shortly after arriving in the UK from Moldova. She chose the College as it had a good reputation, modern facilities and was close to where she had just moved.

She considered studying Travel and Tourism, but chose Business Level 1, and was quickly moved up to the Level 2 course, which was "a great achievement" and showed her a variety of options in the business sector.

In 2017, Veronica was selected for a one-week work placement at Canon UK, which offered a great insight into how a large business works. During the placement, Veronica took part in a marketing competition amongst the placement students, to mock up an advert and marketing strategy for a Canon bag - which Veronica won!

Veronica has now been accepted on to BA Business Management courses at both Westminster University and the University of Kent.

“The subjects in my course helped me decide a direction to go in. The course has given me an insight into business as it does not focus on just one subject or topic.”